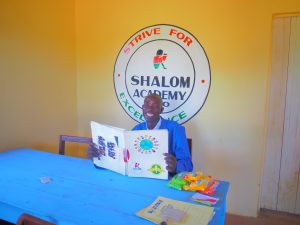 The children at Shalom Academy received their first pen letters from the pupils of St Francis school, Goosnargh. They created quite a stir in Irovo because the children heard firsthand how their contemporaries lived in Britain.

The letters were followed by a terrific scrapbook from the pupils of St Gregory’s, Preston, (pictured above) which featured self-portraits from every pupil and class photographs. It is now kept pride of place in our new resource room.

Led by headteacher Mr Bondi, the children reciprocated by writing their own pen letters, which we distributed to Lancashire schools on our return.

It promises to be the start of some beautiful friendships.

St Gregory’s in the Spotlight

We appreciate all the help and encouragement we get from Lancashire schools for Shalom Academy.

We recently put the spotlight on raising money for lunches and breakfast at the school, so we were delighted when the pupils of St Gregory’s primary in Deepdale, Preston organised a sponsored walk to show support for their counterparts in Irovo, Kakamega in Kenya.

£673.30 will go a loooong way to feeding some hungry children throughout the whole of 2019. Thank you!